Now, sometimes the other Asterisk appears to receive and process the UPDATE first and responds with sequentially:

On other identical calls, the Re-INVITE appears to reach the other Asterisk before the UPDATE, so the call goes on just fine:

Question is: how to avoid this sequential re-INVITE/UPDATE for the sole purpose of RPID update, can UPDATE be disabled entirely?

On the documentation you have the following

Note also that while Asterisk currently will parse an Allow header to learn
; what methods an endpoint supports, the only actual use for this currently
; is for determining if Asterisk may send connected line UPDATE requests and
; MESSAGE requests. Its use may be expanded in the future.
;
; disallowed_methods = UPDATE

Is there a similar option in pjsip not to advertise UPDATE in Allow headers?

Also found that there is a rpid_update=no option per peer, which is probably more suitable in my case.

Looks like having rpid_update=no on the peer has no effect, Asterisk keeps sending an UPDATE 1ms after the re-INVITE, occasionally triggering a 500 - Invalid Cseq from the other Asterisk. See below SIP trace graph.

Thus, the question stands: how to disable support for UPDATE method in PJSIP, either another workaround to this problem? 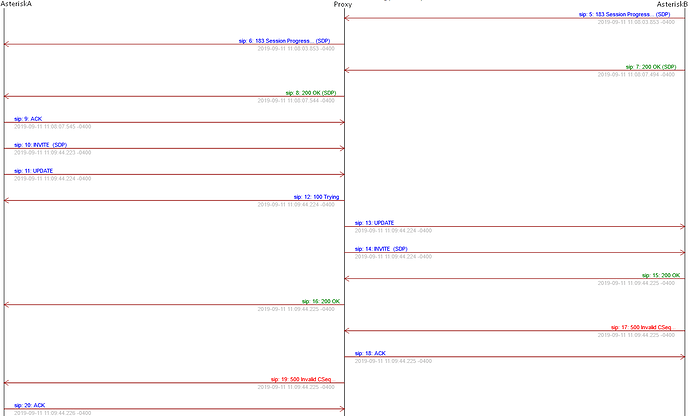