I have a setup with 2 Android clients, based on PJSIP 2.6 using PJSUA2 API, calling each other through an Asterisk 13 gateway (FreePBX distro) on the same subnet. The caller party - D1 - sends the INVITE using TCP transport, due to the size of request >= 1300 bytes. The call can be properly established and everything works fine. During call initiation, all communication between asterisk and D1 is done through the TCP connection.

The problem occurs when the callee party - D2 - hangs up after more than 33 seconds. D2 send the BYE request to asterisk. Then asterisk attempts to send the BYE request to D1, but fails with a transport error. It turns out it’s trying to use the initial TCP connection to do so. But D1 has closed the TCP connection after 33 seconds, as this is the default idle time hard-coded into PJSIP. This results in D1 never being notified that the other party is hung up.

I’m trying to understand who’s at fault here. So any suggestion or hint would be appreciated. Thanks.

On SIP you could use session timers to terminate this call, especifcally Timer F that is the maximum amount of time that a sender will wait for a non INVITE message to be acknowledged, in you case the BYE request, but there is not setting on pjsip to control such option

Thanks for the input. What I’m trying to understand first is how this is supposed to work in the first place.

Is the client right to close its idle TCP connection after 33s? Or is it supposed to keep it alive?

Is the asterisk server right to continue using the TCP connection, even though it has been signalled that the connection was closed? E.g. I can see the following in the asterisk logs:

So basically, it does know the TCP connection has been closed. Nevertheless, later on it continues using it, as it seems from the following:

Interesting questions, but I dont have the answer for such questions because there is not any public document that describe how it should work or at least I don’t know it , looking on the wiki I found a hint related to what you ask

Connection-oriented protocols (such as TCP or TLS)

If the connection the request was received on is still open it is used to send the response.

If no connection exists or the connection is no longer open the first configured transport in pjsip.conf matching the transport type and address family is selected. It is instructed to establish a new connection to the destination IP address and port.

so rewrite_contact beside help us with NAT issue also deal with this TCP connection socket, and it makes sense because it Allow Contact header to be rewritten with the source IP address port.

The pjsip.conf already contains rewrite_contact=yes for all extensions. Does that mean it should be set to “no”? But then you’d loose NAT support?

If “rewrite_contact” is set to “no” then Asterisk will establish a TCP connection back to the device on the IP address and port provided in the Contact header. Whether this is what the phone expects/permits/allows, is an implementation detail on it.

If it doesn’t allow it then you have to set “rewrite_contact” to “yes” and keep the TCP connection up. We provide a keep alive interval option[1] to send a keep alive at an interval. Setting a qualify_frequency so OPTIONS goes out would also send SIP traffic out regularly and help to keep it alive.

I tried with reqrite_contact=yes (which was already the case) and keep_alive_interval=20. I can see in the tcpdump captures that asterisk is sending \r\n sequences at the expected interval, but that doesn’t prevent the PJSIP client from closing the connection. I believe PJSIP expects relevant SIP traffic.

The setting qualify_setting=60 is also already set. But correct me if I’m wrong, the OPTIONS requests are sent on the UDP channel, not the TCP connection that was opened for the INVITE.

It is sent to the Contact on the AOR. If that is TCP, then it’ll use TCP.

The Contact does not specify the protocol. I’ve posted the INVITE trace previously in this thread. I’m happy to send a full logs for inspection: 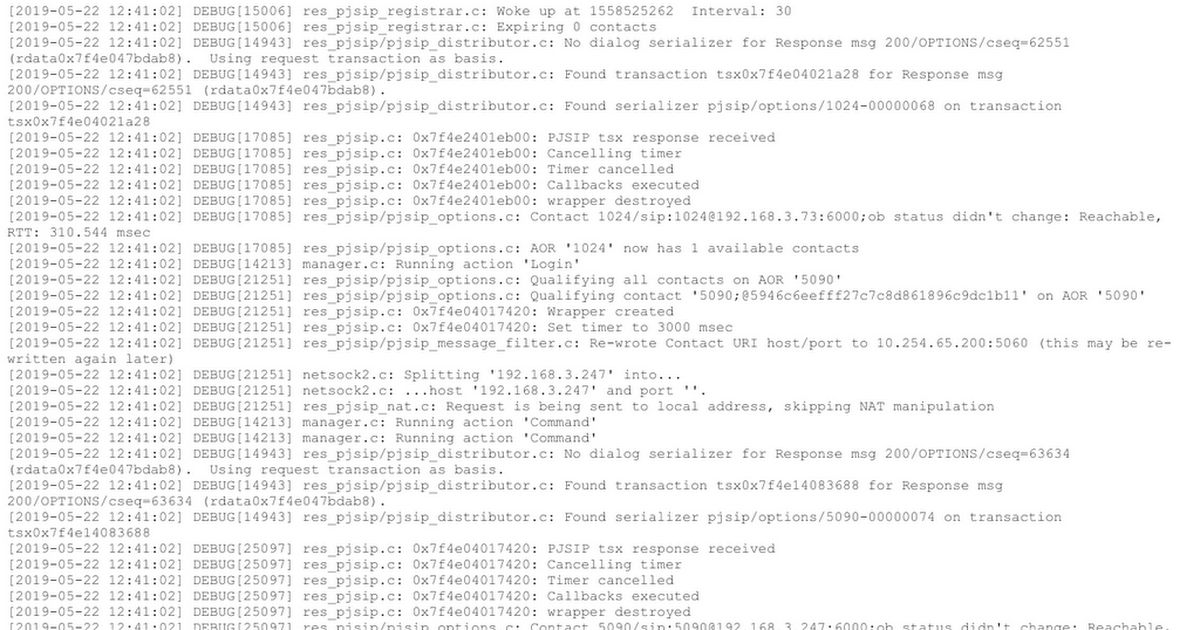 Then qualify wouldn’t work, since it’s using a different transport for each. You could also try session timers[1] to keep it alive, that may work. It does seem as though you’re just fighting the client though.

What I really don’t understand at the moment is how is this supposed to work. The PJSIP client sends the INVITE through TCP, and then what? Is it supposed to keep the TCP connection opened? For how long? Because at the moment, PJSIP has a hard-coded timer of 33s for idle client TCP connections, for which there doesn’t seem to be any access from the application layer (PJSUA2). Do you consider that PJSIP is faulty and shouldn’t close the TCP connection?

It… depends? If it’s behind NAT, then it can not drop the TCP connection and expect things to work. If it’s the same network and the Contact provided to us is valid and rewrite_contact isn’t set to yes, then we’d connect back and it would be fine.

Ok, using rewite_contact=no seems to avoid the problem, the BYE request is sent back to D1 through UDP instead of using the stale/closed TCP connection. Thanks for the input.

For the record, I’ve tested the same scenario using a Linphone-based client, and interestingly enough it doesn’t switch to TCP for the second INVITE, even though it exceeds the 1300 bytes limit. Hence the problem does not occur, regardless of the settings rewrite_contact.