Hi everyone,
Now I’m trying to use PJSIP protocol with ALSA end device.
My environment is: 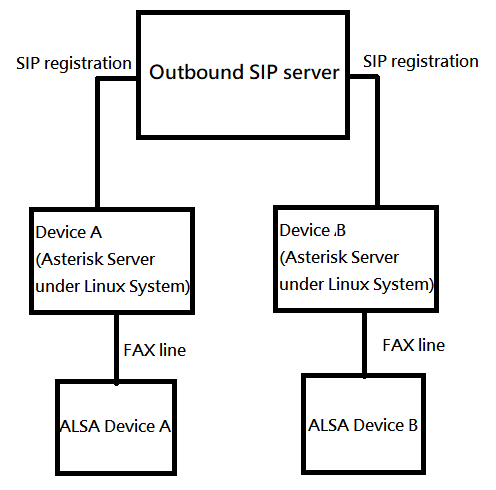 Both Device A and B are registered on an outbound SIP server, and the ALSA device is using FAX line to connected on both Device (linux system).

When I make an outgoing call from device A to device B, B start the MOH because the definition in extensions.conf. And device A received 183 Progress information.

I can see the early media is under transmit from device B by capture the network packet using Wireshark, and device A has received RTP packet from device B (same using Wireshark), but Asterisk on device A do not parsing the packet, cause the ALSA device A cannot hear any early media.
Until I answered the call on device B, and Asterisk will bridge two channel via simple_bridge technology.
(this is because I try to play the tt-monkeys.gsm by using PLAYBACK function, and this function will auto answer the call in default, when I add the " noanswer" option, ALSA device A can’t hear any audio from PLAYBACK).

I checked the code (app_dial.c, channel.c, chan_pjsip.c, chan_alsa.c …),
I thought that is because chan_alsa only handle the PCM device read and write, it do not handle any RTP packet from incoming packet.

Does anyone have any suggestion for my situation?

You need to post your dialplan, a meaningful SIP trace and possibly a console log. Another problem could be that chan_alsa is deprecated, i.e. hardly anybody remembers the details.

Check that your outbound “Dial” command is not using the “r” flag.

I’ve always assumed that the sound card drivers were proof of concept drivers rather than intended for production use.

Also you haven’t said anything about your, so called, Outbound SIP server (it is really a back to back user agent or a proxy), although you do say you have captured the early media RTP down stream of it, so it is unlikely to be the cause in this case.