Calls from Asterisk (13.27.0) to VitalPBX work without problems.

This is my trunk configs: 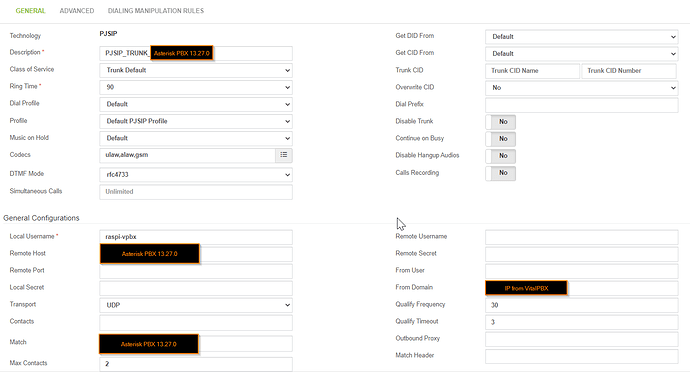 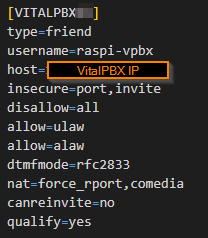 Both are in my internal company with internal IP’s.

Between both we have a Firewall with all allowed. 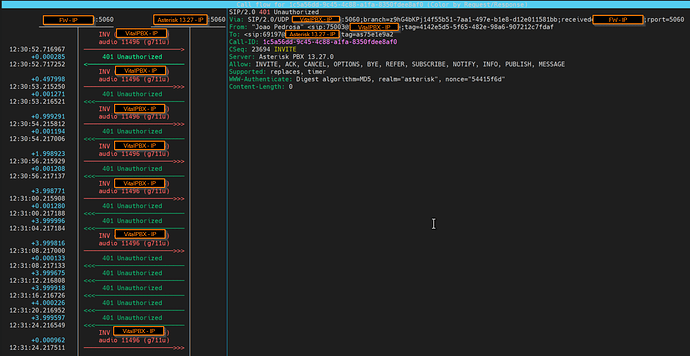 Asterisk 13 is past end of life. chan_sip is deprecated, and will be removed in just over a year. So the first suggestion is to re-implement with chan_pjsip.

I don’t recognize the GUI, but in any case support from the GUI needs to come from its suppliers.

insecure=invite makes no sense without a secret, but if you did have a secret, with it, Asterisk wouldn’t generate a 401, if the INVITE matched the configuration. I therefore assume it doesn’t match.

For a match, either the source address has to match the host address, or the section name (VITALPBX??) has to match the From user. I don’t see anything that I can reasonably guess would set the from user. It looks like address isn’t matching because you are getting the FW address, rather than the VitalPBX one. That suggests you have an application level gateway enabled, assuming FW refers to a firewall in a router. Application level gateways are usually a bad thing.

I assume that the 401 is probably there to confuse an attacker, as the result of “always auth reject”, or VITALPBX?? is matching a device that does have a secret.

If you are not trying to match the From user agaisnt VITALPBX??, you shouldn’t be using type=friend. Especially given there is no password, it could be a security hazard (I can’t see how you use contexts).

no. I has not put password in any side

401 is not an error. It is a request to provide a password, although, as I’ve speculated above, the reason you are being asked for a password, is that the call is coming from an unknown address, not anything listed in sip.conf.

Please post configurations as text, not images. I presume, as there is no template, that the section you posted earlier has context public. I hope that context can’t make chargeable calls, as your type=friend make that relatively easy to abuse.

This is all configuration that I have

With this command, all IP’s are allowed to connect to Asterisk, right?

No. That says that UDP datagrams (which are connectionless) can be accepted on all the machines interfaces, on the the chosen port.

The packets are being accepted but they are then failing to match any sip.conf entry, because they come from FW IP, rather than VitalPBX IP. You really need to correct where they come from to create a secure solution.

If the bind was wrong, there would be no 401s, because the INVITEs would never have reached Asterisk.

If you want to stop the 401s, but without fixing your real problem, add:

to your general section.

Call Log in VitalPBX from call Asterisk (13.27) to VitalPBX

Call Log in VitalPBX from call Asterisk (13.27) to VitalPBX

When I receive the call from Asterisk in VitalPBX, i see the IP from Firewall and the call work without problems

The message still appear, but thank for advice.

I think that the problem could be the authentication in side of my asterisk, like you said “401 is not an error. It is a request to provide a password,”

I give up. I’ve told you what is wrong. Turn off the SIP ALG (or configure the system on the basis that the calls are coming from FW IP and not from VitalPBX, although I think this is a good solution).

I had create a rule in Firewall between this machines without any limitations without services or protocols and ports and the issue still go on.

I think that the problem could be the configuration of trunk from side of Asterisk.

What do you suggest to remove all security in this temporary internal trunk of the company?

I tried this solution without firewall and it works.