I have a couple issues with some of our remote workers and am trying to figure out the best solution. When all of our employees were working in our offices we have the network setup with the modem in passthru and a security appliance with all the QoS and traffic shaping rules applied. We rarely ever had any phone issues.

Once the stay at home order was put in place all of our employee took their computers home with them and some started having phone issues. Some of the issues include their soft phone not being able to answer a call that is ringing, when they try to answer it appears to create duplicate incoming calls (See screenshot). Another phone issue is that some of our agents are logged into their queues but they show as unavailable even though their soft phone show they are registered. We know this because we have an optional extension destination setup that transfers the caller into an IVR that gives the caller options for how to proceed since the agent isn’t available. Another issue that has been reported is their soft phone might only ring once or twice and then another agent receives the call and answers it so the initial agent gets a RINGNOANSWER which is used in our agent KPI’s.

My initial guess on the cause of the issues is ISP problems or I suspect their Modem/Router combo provided by their ISP is mangling the packets. I have had a couple of our agents log into their router and see if there was a SIP ALG setting they could turn off but most of these consumer routers provided by the ISP don’t have QoS or traffic shaping rules, also turning SIP ALG is not an option in most of these devices. I am curious what other people do for their remote workforce? Do you have them change out the ISP provided router with something else? Would using a VPN tunnel help? What are some of the troubleshooting steps I can do to help track down where the problem is? 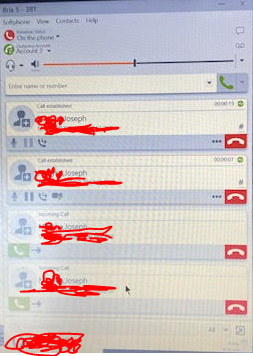 I don’t recognize the source of graphic, so I can’t interpret it.

Debugging this is likely to require console logs, including SIP protocol traces, for the failed calls.

Also, you don’t seem to have said whether you are using chan_sip or chan_pjsip.

I can answer some of the questions but I will have to grab a SIP protocol trace Monday. The source of the graphic is a softphone from Bria, it is showing that there are 4 duplicate calls coming in at the same time from the same person. Every time the agent clicked the green button to answer, another call from the same person would immediately show up. We are using chan_sip for every extension.